Many of you asked us to write about our Big Moving Adventure of 2009, so I thought I’d better get started before the year is over.

It began in February of this year (09) when each one of our songwriting classes, workshops, seminars — one-by-one — canceled. We knew this was due to “the economy” or “the recession” because we’ve never had things get this quiet.

We realized the lease on our rental house in Canyon Country (just north of Los Angeles) was coming up for renewal in the Fall. [When we’d first moved in, only a couple years before, things were flowing, relatively, and we never would have predicted our business would slow down like this.]

So, John and I researched our options and decided we would MOVE OUT. PERIOD.

We decided to put things in storage … and not move in anywhere else for awhile. We hoped to stay with various friends around Los Angeles, until we could find another solution.

We rented 2 STORAGE LOCKERS (not far away, in Van Nuys) and stored all of our household belongings. And all the while, we didn’t know how long we’d be living without our ‘stuff’ … it’s already been 4 months … which is why I’m writing this for you now.

The first thing we did was to have a yard sale. It was 107 degrees that day. No one could have predicted that. So, sales were not as brisk as we had wanted. Duh! But the process got us started.

John Braheny and I had years and years of accumulated stuff in the garage… books, record albums, CDs, cassettes, VHS’s, file folders, photos (in albums and not), artwork … we even found a couple wedding presents that we’d forgotten about. (We celebrated our 25th anniversary this year!)

We had office supplies (file cabinets, desks, chairs, shelving) and boxes of new Pendaflex folders — who uses those anymore? And we each had boxes from our 4 parents who have passed on, and left family artifacts and relics for each of us. We were overwhelmed … and made several trips (8 or 9)  to charity shops … with our car stuffed to the brim.

We sold a carpet and a guitar on Craigslist. We listed other things that didn’t sell. We sold several boxes of LPs to a collector … we donated songwriting & music business books to The Songwriting School of Los Angeles … and John is still donating organization archives (LASS & NAS) to USC … with more to dig through first.

We gave away furniture (not all, but a lot) to neighbors who helped us along the way … including donating all of my beloved plants … and linens, dishes, etc. …. to various friends and loved ones. It was wrenching … but we knew we had no choice. We had allowed ourselves the luxury of being pack rats for much too long.

So this was our first step. And the more we let go, the better we felt. Our Moving Adventure continues …

[Photos: Sorting through photos on the floor; sorting my mom’s silver. Canyon Country house we left in August 09. Looks small but was 5 bedrooms & 2 baths.] 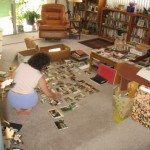 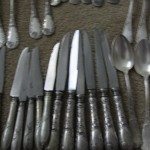 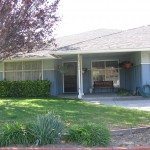